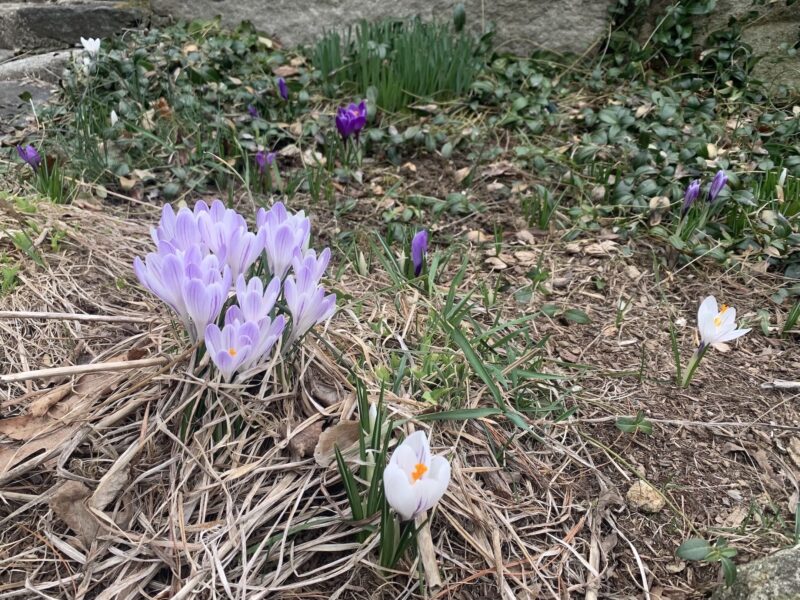 The annual display of crocuses is in bloom in central Greenwich on the hillside by the stop light where North Maple meets the Post Road.  With the first day of Spring just passed and the snow melt now completed after six weeks starting in early February, the warmer temperatures with sunshine are producing several signs and sounds popping up in the backcountry.

There are multiple sightings of various green shoots poking their heads up along Round Hill Road accompanied by larger ones with a hint of yellow buds indicating the arrival of Daffodils. These varieties of flowers are popular in town as they are distasteful to the deer who feast on other plants like Tulips and Azaleas bushes.

Other early appearances include the large leafed Skunk Cabbage which sprouts up in the wetland and marshy areas, as well as the initial buds on the Forsythia bushes which soon explode into a bright yellow burst of color before turning into more non-descriptive flora.

The ever-present Pachysandra ground cover plants that are in beds or grow wild in the woods are showing signs of new energy after a winter covered in snow.  The wilted leaves are starting to stand up to the sun and start their annual blooming process

Not all early indications of spring are plant life.  There are of course the Peepers which sing their evening songs from the vernal ponds frequently found throughout this part of Greenwich.  These emerging small male wood frogs chirp their chorus of distinct croaks to attract mates.  Their sound which can be heard for up to a mile or more are a reminder that spring is upon us.

Of course, the most watched for and observed presence of spring is the familiar sight of a returning Robin in the yard hopping around listening and looking for an earthworm.  One red breasted robin was recently seen on Cherry Valley Road .

Along with the recognition of the robin’s sound, there are other spring sounds now from other migrating birds.  The mornings and evenings have welcoming sounds of birds to help us greet the day with the sun and relax in the evenings.  Step outside or open a window to enjoy these audio offerings and embrace the new season.