Louisa Stone smiles pleasurably as she surveys from the porch of her Sterling Road home the 4.5-acre tract which she and her late husband, Emerson, donated to the Greenwich Land Trust. An ardent conservationist, she has been honored by the GLT with its first-ever Lifetime Achievement Award. Among numerous civic endeavors, Louisa serves as a Director and Secretary of the Round Hill Association.

Ginny Gwinn, Executive Director of the GLT, explains the significance of the Stone’s donation: The Sargent-Gildersleeve-Stone Preserve is an 18-acre greenway in northern Greenwich and its name derives from the three individual properties that were put together to form the preserve. Its conservation value lies in the diversity of the land within the preserve as well as its connections to other open space owned by the GLT and Audubon. Within the greenway are woodlands, meadows, wetlands, rock outcroppings, a stream, and a pond. The land is filled with towering tulip trees, red, white, and black oaks, shagbark hickory, and sugar maples. Its diverse environment can support many varieties of native wildlife, from bees to bluebirds to fox. The GLT will remove invasive plants such as Japanese barberry and re-introduce native plants such as spicebush, allowing native plants to thrive and provide better habitat for wildlife. The preserve often is used by the Land Trust to introduce supporters to the wonders of nature from fall fungal forays to spring walks in the beautiful woods. 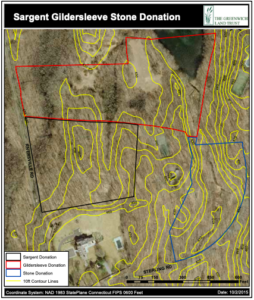