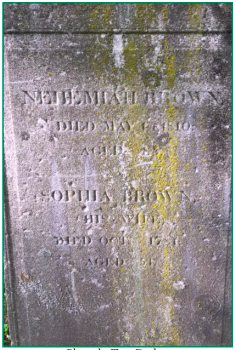 The graves of early Greenwich settlers and British and Tory soldiers are scarcely noticed by motorists negotiating the steep hill atop Burying Hill Road. The settlers have names like Nehemiah, Phineas, Susannah, and Lucius, and most inscriptions are barely visible on weathered headstones scattered on a roadside plot near Topping road. The earliest carved gravestone found on the one-third acre plot is a small, unidentified marker dated May 3, 1762.

The soldiers’ graves in this community burial ground, set aside by settlers for common use, are marked by plain fieldstones and constitute the Town’s own tomb of unknown soldiers. They fell in the waning days of the Revolutionary War at the hands of colonists, Patriots who were mostly farmers.

It is only through the grit and persistence of two neighbors, Val Storms and Jackie Lawler, that this landmark, the oldest graveyard in Round Hill, is now a neatly maintained corner of history. When the Storms moved to Burying Hill in 1989 the cemetery was overgrown with weeds and other invasive plants, tall grass, fallen tree branches and debris.

The women raised funds from neighbors and the Round Hill Association and continue annual fund-raising for maintenance. Initially they were helped by Tree Warden Bruce Spaman because the cemetery is on Town land, but there is no budget providing for the care of cemeteries. “There are approximately 100 cemeteries in Greenwich,” says Bill Burgess, Park Operations Manager, and the Town looks after 15 of those which are abandoned. “We count as much as possible on the kindness of strangers,” adds Spaman. Easements prohibit destruction of cemeteries and some residents with plots on their property hide them from view with bushes.

Jeffrey B. Mead, a descendant of the Town’s founders who has extensively researched its cemeteries, cites the epitaphs on gravestones as a portal to an earlier era, one when emotional sentiments and lessons prevailed. This one was inscribed on the marker of a 44 year old woman in Burying Hill:

“Hark from the cold tomb a doleful sound.”

Mead’s hope is that “hallowed places such as Burying Hill will be restored and preserved. It is one of Round Hill’s oldest and most unique historical sites.” 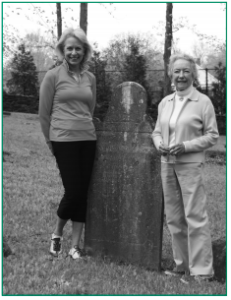