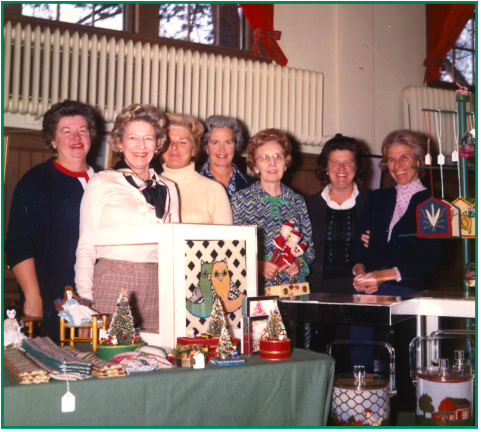 One of the institutions that most effectively brought together disparate strands of early BackCountry residents was the Round Hill Community Guild. Founded in 1840, it originated as the Ladies Aid Society, an arm of the Round Hill Church.

Built in 1810, the church sat at the intersection of two unpaved cow paths: Round Hill Road and John Street. In those days, ladies of the neighborhood, familiarly known as “The Squaws”, formed the Ladies Aid Society which sponsored fairs and oyster suppers to support the church. The group continued to meet even when the original church ceased to function, until 1921, when The Round Hill Community Church was reborn, welcoming all denominations into its sanctuary. Shortly thereafter, the Round Hill Community House was completed in 1926, with funds raised through dinners and events sponsored by the Ladies Aid Society.

Of the five original contributors for the purchase of land on which the Community House stands, only one was a member of the Church. Subscribers included neighbors and friends, as well as the Ladies Aid Society, who took charge of it at its completion, reaching out beyond the Church for members. In 1933, The Ladies Aid Society changed its name to the Round Hill Community Guild. From the beginning, it was conceived to benefit the entire Round Hill neighborhood.

Lola Irvine, one of the earliest members of the Round Hill Community Guild, and Secretary of the Friendship Circle in 1977, whose memories were recorded in 1979, told of these experiences growing up in Round Hill. “I remember horseshoeing, at Tom Haight’s blacksmith shop on East Old Mill.

We (children) used to be there a lot to watch them with the anvil and the shoeing. We had skating parties, too, in winter. The property up here was flooded and the older boys would take a rocking chair, and put runners on it for us to learn to skate. When the community house was built in 1926 we had basketball and handball, baseball and dancing. You name it, we had it; busy every single night of the week.”

Lola, who later became the bookkeeper for Razooks, a women’s store on the Post Road, reminisced: “Of course when the war (WWII) came we did tremendous knitting for the servicemen: socks, scarves, caps, sweaters.”

“From its inception the Guild’s mission was to provide “ a friendly, informal organization of women of different interests, ages, backgrounds, education and faiths whose common bond is the pleasure of working together in support of the Guild’s responsibilities and policies. These responsibilities are to arrange activities and programs for our children, our families, and the community; to maintain the Community House, and to assist worth organizations. Last and probably most important: to hold fundraising functions to make all of these things possible.” ( notes from the annual report of Mrs. Amadee Cole, Guild President, 1962).

Early in community house history, although there were cars, transportation was not easily available. Residents used the Community House as a place to congregate for the Spring Fair, The Harvest Supper, and The Christmas Sale. Those events, organized and produced by members of the Guild, often involved more than a hundred ladies. Members knitted, sewed or made other contributions.

Mary Hull, a veteran Guild member, recalled that the balcony of the Community House, (currently removed, but slated for replacement during renovation) was used throughout the year as workspace for items to be sold at the fair. Members of all ages came together to sew, do needlework, paint furniture, make Christmas ornaments and other crafts for sale, the proceeds of which were used to refurbish the community house and to fund the benevolence program which included: Greenwich Adult Day Care, Greenwich Emergency Medical Services, Neighbor-to-Neighbor and, Round Hill Volunteer Fire Department and several college scholarships. When it was not in use for regularly scheduled activities private rentals were encouraged. In the past it has been home to countless receptions, country hoe-downs and charity boutiques.

At the Harvest Supper the Guild attended to decorations, the menu, baking and cooking for two sittings; men provided and carved the turkeys, and also served the tables. Notes from the “State of the Guild” message from Mrs. Amadee Cole, Guild President record that the Harvest Supper(Fall of 1962) served a total of 560 people at two separate sittings. Initially the turkeys and produce served at the Harvest Supper were home grown, but later the vegetables and turkeys were store bought, though pies were still made by Guild members.

At the 1963 Christmas Sale, the largest source of revenue for the Guild, members of different groups had separate booths. Guild members sold plum puddings while members of the Friendship Circle sold knitted items. The Children’s Committee made toys and supplied food and games for youngsters, a Luncheon Committee staffed an area where guests could each luncheons prepared by the Guild. A Treasure and Trifles Committee solicited items for resale such as jewelry and china. The Tinsel and Glitter Committee sold Christmas ornaments, while the Christmas Wrappings Committee sold interesting Christmas paper and wrapped gifts for customers. The Stocking Stuffer Committee made and sold a variety of inexpensive items. The creativity and enterprise of the Guild members produced the Christmas Fair whose revenues supported many of the Guild’s activities throughout the year.

By 1978 the Guild’s membership numbered 500, of whom 87 were Church members. Thus, the Guild represented a true cross section of the entire Round Hill Community. “It was a very ecumenical group,” says Roni Schmitz, former Guild President. That was important to newcomers like Jan Ziemba, who said, “When my kids were in the Round Hill Nursery School I felt like I belonged.”

Despite its influential role in the community, the Guild ceased to exist in 1998 when the acting President could not raise a board in an increasingly complex society. The Round Hill Community Church then took over the reins of the Community House. Modernization of its facilities began in 2009 and restored the center to a vibrant venue for community activities.

How fitting it is that the new home of the Greenwich Land Trust, the gift of Mrs. Louise Mueller, sits at the heart of so much history, across from the Round Hill Store and Service Station, and just down the road from the Round Hill Community Center.