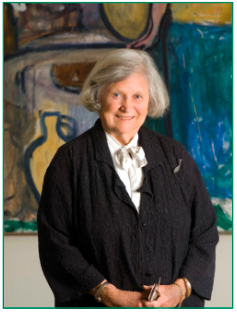 I remember first seeing Round Hill as a child squeezed in the back seat of Daddy’s 1928 Maxwell as we made our way up Riversville Road. My brother, sister, and I played the “I see Round Hill” game, the winner being the first one to see the hill through the trees.

Permelia Reed (Mrs. Joseph Verner) gave me a photograph of Round Hill taken from her estate on Quaker Ridge Road before the house was built. It pictures a huge round hill with no trees—just tall grasses. Beezie Brownell (Mrs. Kenneth C.) told me that she remembered the hill as being the soggiest baseball field for the youth of the BackCountry before we planted hundreds of trees. The elms, oaks, and apple trees took care of most of the water.

Dr. Carl Paterno, a non-practicing physician, built the “Round Hill Estate” in 1939. Artisans were imported from Italy to handle the intricate brick, stone, and fancy interior woodwork. But Dr. Paterno never moved in! Instead, he sold it to Sinclair Robinson, who in turn sold it to Joseph Hirshhorn in 1961 for $250,000.

In a sales pitch to Mr. Hirshhorn, “Round Hill” was described as being the highest point between New York and Massachusetts. Indeed, through the trees we could see a panoramic spread of Long Island Sound and Long Island itself and on a clear night from the third floor “pool room” we could see the lights of Shea Stadium.

There is a geodetic marker in the hearth of the entrance gallery fireplace. In measuring distances, a tower was built outside our formal garden and “readings” were taken. This was rather disruptive so another geodetic marker was installed in a more accessible area on the grounds. (Geodetic markers are physical, geographic reference points located at precise coordinates throughout the world. Most of them are 3 1/2” bronze disks.)

Mr. Hirshhorn was attracted to art as a child when an insurance company—his mother paid 10 cents a month in premiums—sent calendars at Christmas decorated with large works of art. “Round Hill” eventually became a private museum and sculpture garden and housed part of Mr. Hirshhorn’s large art collection along with his collection of American antique furniture and Oriental rugs.