Fields of purple loosestrife and garlic mustard’s pretty white blossoms are pleasing to the eye and in autumn, “burning bush” is downright spectacular, its magenta leaves emblazing the landscape.

“The problem is that these are invasive plants,” says Steve Conaway, Stewardship and Outreach manager for the Greenwich Land Trust (GLT). “They grow unchecked, spread easily and rapidly and out-compete native species our ecosystem is critically dependent on. They also reduce biodiversity by destroying habitat needed by native wildlife.

competitive and move north,” says Conaway, who oversees invasive plant removal on GLT’s 737 acres. Diabolically, many of these plants are beautiful. Burning bush and Japanese Barberry were widely sold by nurseries until they joined the state’s long list of illegal plants. (In fact, both of them and some others on the list still are sold in parts of Connecticut. Sellers are subject to a $100 fine per plant but enforcement is primarily by suasion.) “While some exotic plants were introduced on purpose for gardening and landscaping, others arrived inadvertently as passengers on imported products,” adds Conaway.

The scourge of invasive plants takes many shapes and forms: Japanese Barberry, e.g. harbors ticks that cause Lyme disease in humans and pets. Asiatic bittersweet, a woody, python-like vine, strangles trees as it grows; Mile-a-Minute vine, which can grow six inches a day, forms a dense mat and suffocates trees and shrubs; the vaunted burning bush replaces native shrubs by smothering them with shade and a tight root system. Garlic mustard releases chemicals that inhibit the growth of native trees. Phragmites, tall brown reeds that grow to 10 feet, clog and alter watercourses.

Plants from the threatened milkweed family provide food for Monarch butterflies, and a host of small animals and songbirds depend upon native plants for habitat. Conaway points out that the majority of wildlife are diet specialists and require food from a particular source. If the source disappears, so does the wildlife.

Last month, host GLT and a company called Invasive Plant Control (IPC) of Nashville, convened a passel of experts in Greenwich for a day-long invasive plant workshop. Scientists, academics, the DOT, and professional conservationists from some 20 towns around the state and Westchester attended. If nothing else, the workshop heightened awareness of the problem. “The overriding aim was to educate people about invasives and encourage them to plant native species,” says Conaway.

All of the speakers emphasized that controlling invasives can be a very long and frustrating experience and containing some of them may literally take years. (For guidance in identifying and removing plants from your property see our website– www.roundhillassn.org/ Greenwich Green & Clean also has a very good illustrated pamphlet about invasives at no charge.)

For its part, GLT has partnered with IPC which has worked nationwide with the Nature Conservancy and with large federal properties It mapped all invasive weeds on GLT properties to learn where and when to attack particular species. Conaway points to results at its Allen and Milbank properties–Milbank is located on Round Hill Road near the New York border. “Invasive removal has freed native wildflowers to flourish and provided ideal habitat for local wildlife.”

GLT spent more than 200 volunteer hours on the 5.5 acre Allen preserve last year and part of it, a meadow on the east side of Round Hill Road just north of the Lake St. circle, has become a splendid showcase for the partnership. (That’s a bat house perched on the north end of the meadow and was erected as part of an Eagle Scout project.)

Backyard gardeners don’t have troops of Boy Scouts and other volunteers available but they can effectively pull and cut in their own backyards. Mile-a-Minute, porcelain berry, garlic mustard, and Japanese knotweed are vulnerable to stoop labor–yours or someone else’s. Invasive vines should be cut high and low, says Conaway, “as high as you can reach and as low to the ground as possible.”

Patience and persistence are paramount in any attempt to control invasives and the first step, all the experts agree, is to familiarize yourself with them and their identification because many have native look-a-likes.

Another mode of attack is ongoing at the state level. An agreement between the Connecticut Department of Environmental Protection (DEP) and scientists at the University of Connecticut dates to 2009 and made eradication of Mile-a-Minute (MAM) a top priority.

It’s a dubious distinction, but Greenwich is credited with being MAM’S birthplace in 1997 and Logan Senack, Connecticut State invasive plant coordinator, says the vine has now spread to 32 towns. Called “the kudzu of the north,” MAM has its own website (www.hort.uconn.edu/mam), a public, central source for locating it and everyone is asked to report sightings of infestation. Senack says the paperless reporting system allows staff to follow up on both public and private property, confirm identity, and provide control options including “pulling parties.” 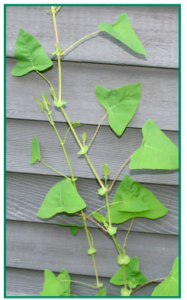